In many of the more relaxed civilizations on the Outer Eastern Rim of the Galaxy, the Hitch Hiker’s Guide has already supplanted the great Encyclopedia Galactica as the standard repository of all knowledge and wisdom, […] it scores over the older, more pedestrian work in two important respects. First, it is slightly cheaper;…

That’s how Douglas Adams introduces the Hitchhiker’s Guide in the first novel of his series by the same name. Wikipedia has several similarities to the Guide that are highlighted in that first characteristic. Like the Guide it has supplanted the more scholarly works with its reach and breadth, as well as popularity.

I vaguely remember how years ago we were sitting in the Florida sun off-campus and Gavin made the remark that you would just have to put Wikipedia on a memory card, put it in a phone and you’d basically have the Guide, including about the same amount of accuracy.
Enter Wikireader 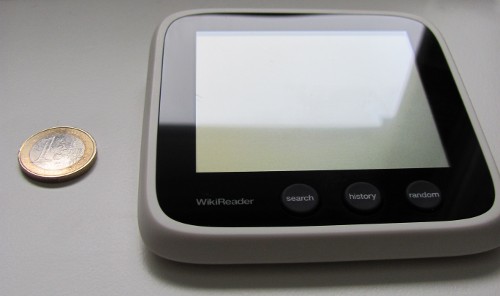 Granted, it’s a device that differs in many aspects from what purists would call the Guide, notably absent are the hundreds of buttons Adams described and it doesn’t have a cover, and so on, but in essence it provides the world’s knowledge summarized in over three million articles in a memory chip the size of my fingernail.

Nowadays, with smart phones that have decent browsers being pervasive, it’s not quite as impressive as it might have been even a few years ago. Nonetheless, (ignoring a few temporal paradoxes concerning Wikipedia’s existence) I’m sure that I would have killed to own such a device up until a few years ago. The potential for being a smartass (and having the sources to back it up) were just so darn limited back in my youth.

Over the holidays I spent several days without an Internet connection (if you don’t count the phone) and the Wikireader proved that Wikipedia’s addictiveness is also present in this device. The ‘random’ button is especially genius, you never know what weird topic comes up that you have never even heard of. You can then hit the button again and again, with around a second latency, until it looks interesting. The device takes getting used to, since it’s counterintuitive that the device is not backlit and thus is hardly readable in low-light conditions but I’m looking forward to trying it out in the summer.

The physical manifestation of Wikipedia in my palm is an interesting thing. As long as I can find some AAA batteries, I’ll always have that encyclopedia, no matter how many sea cables are ruptured or how much filtering a government would like to employ. Surprisingly, as long as the Openmoko company runs we even get ‘new editions’ like the Guide. Only those aren’t downloaded directly, we have to want to load the new image onto our microSD cards (or have new cards shipped to you). More importantly, though, technically everyone can make their own ‘editions’, so we don’t have to accept a “Mostly harmless”, if we don’t like it. Admittedly, I tried to ammend non-Mediawiki-content to my image but quickly abandoned that for FBReader on my phone.

…and secondly it has the words DON’T PANIC inscribed in large friendly letters on its cover.