A week ago Twitter and Identi.ca were abuzz with news that the Document Foundation had been founded and that they had released a first beta of their OpenOffice.org fork, LibreOffice. Some voiced cautious optimism about the project but were not convinced that it was a true, full fork, yet. The OpenOffice planet aggregator overall sounded rather positive, and a LibreOffice planet is already in place.

So far so good. Now it’s time to pull this office suite out of the quicksand it has been slowly sinking into over the last few years. It’s not that there were not continuous improvements over that time (document comments alone were a great leap in 3.1) but there was just a lot more sand that was being added (yes, it’s a mediocre metaphor, I’m sorry).

By far the biggest problem is the current state of interoperability. Since 2007/2008 we have needed import/export filters for OOXML. They should have been the absolute highest priority. Now, more than two years along, we still cannot display a generic docx file (with a TOC and a few images), without the format completely breaking.

I understand that this is difficult, prone to break, and OpenDocument should solve all our problems (alas, Office 2007 SP2, has been a sobering comment on that approach) but the matter of fact is that we have lost ground, tremendously. With Word 2003 and OpenOffice 3.x, formatting bugs were rare and collaborating was not an issue. Since 2007 and especially OOXML that’s no longer possible and I, for example, have been unable to use OpenOffice for basically all collaborative tasks that have to look right; and this is not even counting viewing/editing “SmartArt” or Microsoft’s current bibliography features. I don’t want to use Office 2007, right now I have to.

Apart from absolutely crucial elements like above, LibreOffice now also has an opportunity for innovation. Innovation that is not slavishly copying Microsoft’s ribbon interface or similar recent changes in the text-editing-world but finding ways to work more intuitively with this office suite and improving the tasks that matter, i.e. working with text, numbers and doing basic layouting, while maintaining a stable, reliable office suite with sufficient features.

The difficult question in that context sometimes is: “Am I introducing this particular feature so Microsoft documents can be edited well (e.g. SmartArt), or am I slavishly copying functionality because I think users need it or want it?” Finding the correct answer to each new feature provided by the big pink elephant in the room is going to be diffcult and take time, I just hope it won’t take too much.

A cautionary tale of why to take this time though is exemplified by weird things one still comes across in OpenOffice and LibreOffice: 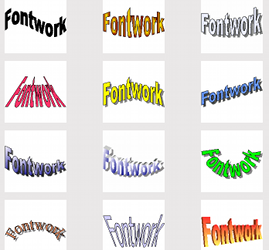 Did you know you can still create WordArt? It’s called Fontwork. You can find it with View ->Toolbars -> Fontwork. It needs to go. 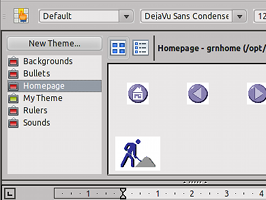 Here is a thumbnail browser. Cool homepage icons, eh? I’m trying to remember if there ever was a document that I recall which was visually improved by a stock clipart – this especially includes presentations. Don’t think so. Check out the “Rulers” and “Sounds”, too. It’s under Tools -> Gallery.

Once implemented, things are not easy to remove, there will always be someone who depends on them. In the end, though, I hope the community comes down on the side of offering good, modern defaults and sacrificing the odd feature to make it harder to shot yourself in the foot visually. I hope in the end it will make working with LibreOffice pleasing, rather than a chore.

One of the elements that gives me the most confidence in this project is their list of Easy Hacks. It shows that the foundation and its volunteers realize that the existing code needs to be harmonized, corrected and most of all tidied up, so that legacy code will not hold future developments back as much as they have in the past.

So, good luck LibreOffice and please, please do not change the name back to OpenOffice.org (the .org especially has been so incredibly annoying over the years!) should Oracle give the name back. Make a fresh, bold new start.

If you want to help this community, you can contribute your time or funds.