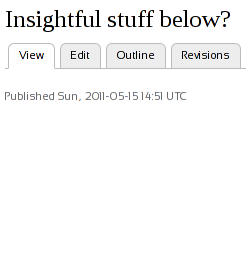 If you are trying to upgrade a site running Drupal 6 to 7 and have messed around with your language settings or input formats, you might be in for a surprise. So, if you are seeing nodes or comments which have a title but an empty body on view and edit, it makes sense to check for the following.

If you have turned the locale module off entirely, but you still have content which is not classified as language neutral, it’s likely that you will now encounter problems. This could probably also happen if you have locale enabled but your specific language is not configured. Let’s presume you do not want to enable the locale module. Missing input formats for content which still has it assigned can be similarly problematic.

In either case, the problem can be solved quickly by adjusting a few rows by hand. If you are familiar with the Drupal 6 table layout and, for example, expect text bodies to show up in node_revisions, you’ll be in for a surprise, since the database schemas have changed in several important areas.

Therefore, you’ll find a primer below the warning on where to find text body specific definitions for input formats and languages for nodes and comments in Drupal 7.

Big fat warning: Of course you need an sql-dump so you can restore your database when you make a typo.

Switches input format from 3 to 1 for all nodes and comments:

A quick drush cc all is definitely encouraged since the menu cache is at the very least affected when it comes to localized url aliases. Case in point: the language specific alias vanished for content which I switched back to ‘und’ and the page could now be found under node/123.