The end of the semester is finally inching closer and one course in particular ended with a quite successful final presentation for our team of 3. The objective was to use several crates of Lego Mindstorms material to build a working model of two atm machines.

Rebooting ATM image is CC BY-NC-NA from n2b. Our ATM not quite identical to original.

And that’s what we did. OK, not quite, our currency consisted of square wooden blocks (about 50mm*50mm*4mm) and our bank cards only contain a black and white strip that encodes a binary number. We reused some old credit card sized plastic cards and used the pattern on the right for the cards. 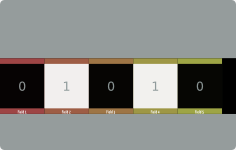 Then we built a PIN pad with a cut up connector cable, a project box, 6 buttons and a handful of resistors. Additionally, we had team members that were tweaking the construction until every single “bill” dropped perfectly. Then, all that was missing was an actual backend. For this we simulated a database with an array (loaded from, and saved on exit to, a text file) and set aside one of the NXT control units to serve as the bank server. Then, our ATMs send requests as a string over the weird Bluetooth stack to the server and got a reply back, depending on the account’s state. Here is the end result. It comes in at just about 1200 lines of NXC code with support for German, English and French, as well as administrative functions on the bank to manage accounts.

This and three more videos.